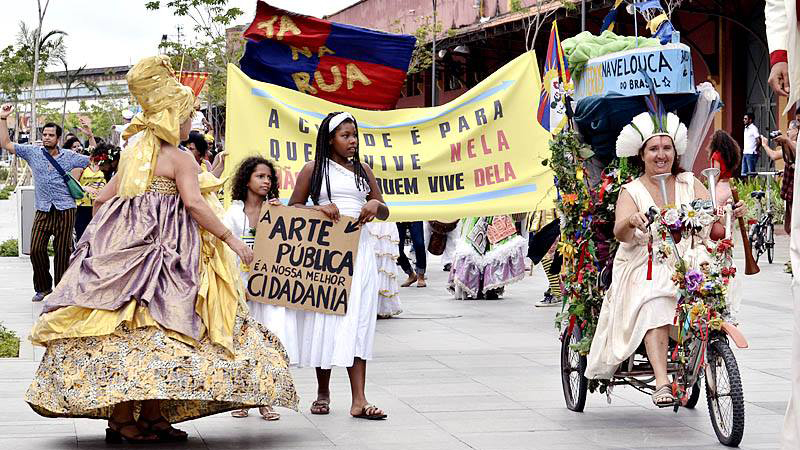 Artistic and cultural actions in public spaces, as ways of gathering people, preserving memories and promoting collective expression, have always reinforced the city’s main functions, being a vital part of the city, a repercussion of its inhabitants’ heartbeat.

Past uses of art and culture as strategies for city development, especially in historic centers, had a contradictory effect in lowering inhabitants’ daily rhythms, by turning those places into spectacles to be visited and consumed. Therefore, we had analyzed this process based on Henri-Pierre Jeudy and David Harvey.

Henri-Pierre Jeudy had developed a profound critique on the role of artists, cultural associations and cultural heritage institutions in producing cities that are a spectacle, a reflection of a society that is being homogenized. The excess of patrimonialization, of musealization, of celebrating a past would be a way to eradicate conflicts, homogenizing cultural diversities into a profitable product for tourism and consumerism (JEUDY, 2005).

David Harvey, in his Marxist perspective, sees capital as the responsible for creating cultural homogenization and conflicts’ pacification in the city, therefore artistic and cultural actors are seen more as “victims” of this process than as responsible for it. He observes that culture and quality of urban life had become a commodity in cities where their political-economy is mostly based in consumerism, tourism, and cultural and knowledge-based industries. Since capitalist class powers are dominating urbanization process, this includes state apparatuses, populations’ lifestyles and cultural values (HARVEY, 2012). However, the more easily marketable such items become, less unique and special they appear, as we might observe in the process of “Disneyfication” of historic centers (HARVEY, 2012).

In the last decade, Rio de Janeiro had been passing by urban transformations, motivated by big events, like 2014 World Cup and 2016 Olympic Games. In the historic center, urban plans and public order policies had been implanted in order to enhance its potential to attract real estate investments and commercial activities for leisure and tourism. In several cases, we understand that those spaces are more likely to be beautiful ‘scenarios’ for visitors to host more ‘spectacles’ than to be meeting places for locals. Even if those plans’ approval and execution were controversial and public order policies were inefficient and partial, it seems that the great spectacle of the 2016 Olympic Games had stupefied people and silenced contrary voices.

During this process, artistic actions in Rio de Janeiro have been playing an important role in defending art as a citizens’ right and in discussing the city.

Considering the recent mobilizations around the world as a sign of shift: from a society of spectacle, in which people were alienated by consumerism and relationships between people and places were superficial, to a renewed social engagement, in which people are gathering to creatively provide their common needs, we had observed artistic actions in Rio de Janeiro as part of a global context, therefore, we were motivated to search for study cases in other cities.

Since Barcelona had inspired recent urban transformations in Rio de Janeiro and their inhabitants are now protesting, using Venice as the extreme example of the negative effects of tourism and leisure industries, we had searched collective and creative initiatives in both cities in order to observe Rio de Janeiro’s case through wider and more precise lens.

The artistic actions that we had been studying in Rio de Janeiro were not only an artistic performance or a cultural event, they had a political and social nature, creating open debates about city development, art and society. Therefore, we had related them to Lefebvre’s thoughts, when he affirms that the future of art will not be artistic, but urban (LEFEBVRE, 2001). Since Lefebvre had strongly influenced the International Situationist (IS), we relate this notion to the IS definition of “unitary urbanism”, which would be a culture of creative activity that constituted more than art, it would be a collective expression of a new society (McDONOUGH, 2009).

Those definitions are closely related to Jordi Claramonte’s concept of Contextual Art, which is an artistic practice that does not represent a social or political context, but is socially and politically articulated, in a relational and situational context, using artistic tools to create a new order of aesthetic experience (CLARAMONTE, 2010).

Claramonte affirms that the popular or folklore quality that some artistic practices might have offers a common language for collective and individual creation, relating artistic production to people’s lives, being modes of relation that update and re-create artistic actions to build situations (CLARAMONTE, 2010), we highlight that artistic actions in Rio de Janeiro are closely related to traditional and popular culture, as part of its continued actualization, being as relevant as other forms of artistic expression.

Based on the definition of artistic actions as modes of relation, we intend to study their potentials and repercussions in the city, by using Henri Lefebvre’s concept of rhythmanalysis and Jordi Claramonte’s concept of modal aesthetics.

Considering the actual global crisis as motivators for a renewed social engagement, we defend artistic actions as rhythms, as cycles, as a heart that is beating and producing life in the city. We believe that those initiatives are preventing the city, especially its historic centers, to be consumed and emptied of life, of shared moments, of its uniqueness. Even if ephemeral, we aim to comprehend them as inductors of a new cycle of social and artistic engagement that is connecting people and its potentialities for a collective and creative city.